Okay don’t get me wrong; I love sports and I think it’s crucial in today’s society for various reasons, including our health. Yet, think about, sports are really quite strange. Take football for example. Eleven grown men or women are running around on a lawn trying to kick a ball into a cage. However, some sports are still a bit weirder than others.

In this article, we look at some of the weirdest, though cool, sports that people practice around the world. Happy discovery!

Yes, you’ve read that right! Remember the quidditch that Harry Potter and his schoolmates played in the popular movies? Well, this sport has also spread to non-magical people, known as ‘muggles’!

Muggle quidditch is played mainly in the US, but also in many other countries, and since 2012 a world championship has been held every year. Each team has seven players on the field who, just like in the movies, take on the roles of guards, beaters, hunters and seekers.

The ‘clone’, the ball the players score with, is a badly inflated volleyball, and the ‘dunks’, which the players throw at each other, are usually three foam balls. The “golden quicken”, which in the films is an ultra-fast little golden ball with wings, is represented by a neutral participant dressed in yellow with a tennis ball tucked into a sock hanging from his butt. To “catch the golden quill”, the aim is to snatch the sock with the tennis ball. To make things really believable, all players must always keep a broom between their legs.

Bo-Taoshi is a Japanese sport in which two teams battle for control of two high poles. Each team has 150 participants who line up around their ‘home’ pole at the start of the match. When the starting gun sounds, half of the team stays behind to defend their pole, while the rest of the teammates run towards the other team to topple their pole. The result is two giant piles of 150 screaming Japanese climbing and trampling each other. The team that first pulls the other team’s pole down to a 30° angle to the ground wins the match. Interesting isn’t it? 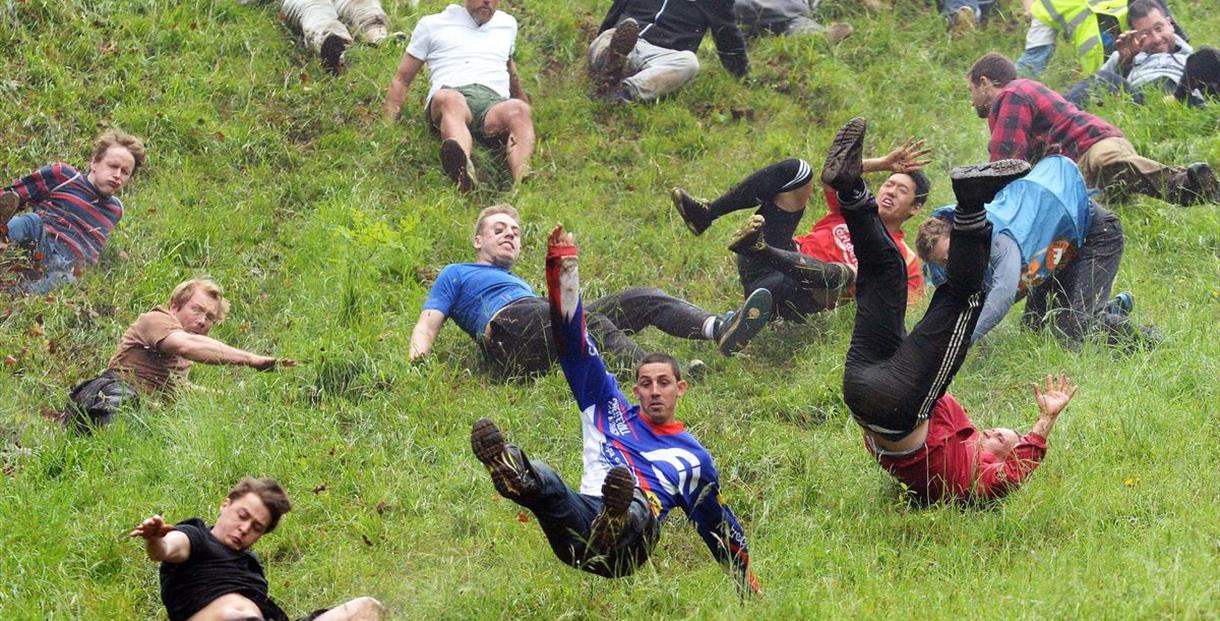 No this game is not just for cheese lovers! It is actual a fun sport and hobby that anyone can practice on a hill called Cooper’s Hill, near the city of Gloucester in England.

This annual cheese rolling competition starts with a round cheese being rolled down the steep hill, only to be chased a second later by a few dozen people running, sliding and tumbling. First down the hill wins. Below, ambulances stand ready to care for the injured. Because the cheese reaches such high speeds, and spectators can be hit, in recent years it has been replaced by a foam cheeseball.

So, this one is exactly what it sounds like – a sport that combines intelligence and brawn, by interspersing chess with boxing. Each match starts with a round of four minutes of rapid chess, followed by a round of three minutes of boxing. At most, competitors play or box for a total of 11 rounds, and they can win the match by either checkmate or knockout. The sport is played in Germany and England, among other countries. Kicking your partner out of the ring by playing chess sounds exciting don’t you think?

Worm charming, is a sport mainly practiced in England, the United States and Canada. As the name suggests, it involves attracting earthworms from the ground. The world championship is held every year at a primary school in the English village of Willaston.

Each team is given a patch of grass, from which they have to attract as many worms as possible. They are not allowed to dig or pour water into the soil, only to create vibrations, for example by tapping the ground or playing music. The team that gets the most earthworms in a given time wins. The worms must be handled carefully and released back into the soil after the competition. The world record for worm charming was set at the 2009 World Championships by 10-year-old Sophie Smith, who raised 567 worms from a 3 m2 patch of grass. Do you want to use your charming powers to attract worms? Weird right? But if you’re eager about it, you now know you can do it in Willaston!

What are your thoughts about those games? Let us know in the comments below! And if you want to learn more, come back to check out the second part of this article!